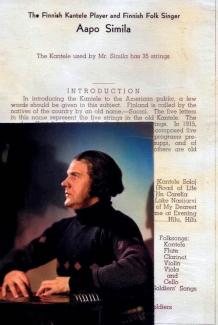 Ladies and gentlemen. I want to introduce to you a Finnish folksinger, who arrived here about a month ago from his faraway homeland. Finland has in the last few years received considerable publicity in the United States for three reasons: first, for paying their war debt to the United States, second, for the music of Sibelius and third, for our great runner Paavo Nurmi.

In this evening’s concert you will hear music played on a Kantele. The famous Finnish classic Kalevala was written in prose to the music of the Kantele. There are 50 poems in the Kalevala. It is not by chance that there are 50 poems in it. Then our master in music Sibelius in the year 1915 had his 50th birthday he had completed 5 symphonies. They were said to symbolize the 5 strings of the Kantele.

To introduce his concert Aapo Similä will play a composition by Sibelius called Church Bells.

Another song by Merikanto” Karjalan mail’, in Karelia, pictures the traveller’s homesickness.

”Näsijärven rannalla”, On the shores of Näsijärvi. In the first verse the singer asks the waves the whereabouts of his loved one. The waves answer they have not seen her. In the second verse the singer hopes for their love to last thru the winter until the waves again roll freely.

”Heilani kamari”, My sweetheart s parlour, gives in song the summertime in Finland, the birds singing and the innocence of love.

In the song ”Tule illalla”, Come in the evening, the boy playfully and comically invites the girl to come to him when the folks are sleeping.

Follows the humoresque ”Hilu hilu”. Here the boy with the good-natured satire reproaches his girlfriend’ s fondness for gaudy dresses. The second verse tells that the candlelight isn’ t enough to keep his love burning. The third verse tells of the girl’ still loving the boy when his ardour has cooled.

Aapo Similä will sing 5 more songs before the intermission. Added to the Kantele there will also be music played on the violin and cello. First, we will hear an Estonian folksong ”Kannel, kannel”. The Kantele is bringing joy and consolation in time of sadness. Let us mention that the Kantele was also a folk instrument in the Baltic countries.